Our support team are frequently asked to explain ACP and ARP signals and how they are used, and in many cases why they do not appear to work correctly. The ACP and ARP signals are a standard way of representing the direction a rotating radar is pointing at any given time. They are used for conventional radars, which rotate around a central axis. The ARP signal (Azimuth Reset Pulse) is a pulse that appears once per revolution at a reference point. This reference point may correspond to North or, for a ship-based radar, the bow of the ship, or it could be any other fixed reference. At the time this pulse occurs the pointing direction of the radar is known. The ACP signal (Azimuth Change Pulse) is a pulse that occurs at each regular increment of angle after the reference point. There are a fixed number of ACP pulses between each ARP pulse. Commonly, this could be 360, 2048 or 4096.  If the number is 360 then it means there is an ACP pulse every 1 degree. So the angle of the radar in degrees is obtained by simply counting the number of ACP pulses after the ARP pulse. If there are 2048 ACP pulses per revolution, each pulse corresponds to 360/2048 degrees, so counting the number of pulses and multiplying by 360/2048 gives the angle in degrees. 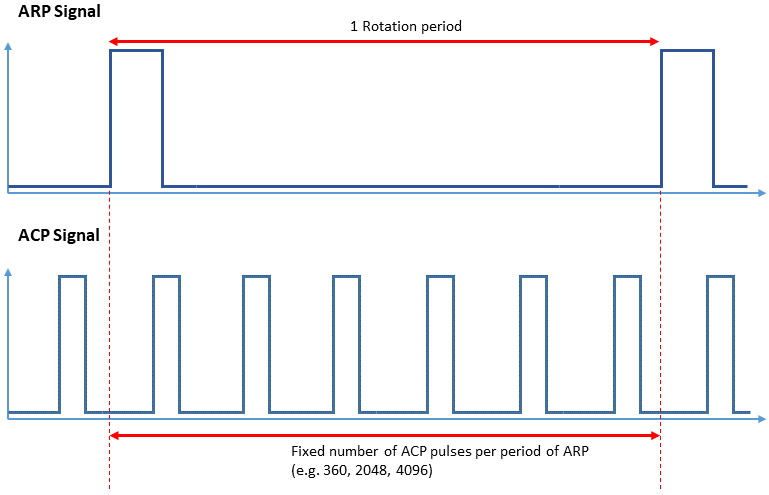 So what can go wrong with ACP/ARP signal handling?

To begin with, what does the position represented by time of the ARP pulse represent? Is it the bow crossing of the ship, for example, or some other angle on the ship, which can happen if the radar has not been correctly aligned with the bow. It is necessary to have a reference point, but it is also necessary to know what that reference point is and, if necessary, apply a correction to adjust the azimuths to a more useful value. In a land-based radar, it is useful to have azimuth 0 representing North, but this is only true if the ARP pulse is aligned for that value. In general, the radar may not have been aligned like that so an offset is needed to adjust the reference value. This is simply an addition to the calculated ACP value.

Some of the practical problems with the handling of ARP/ACP signals are the same as any other signal transmission. A signal generated in one piece of equipment is connected to a receiver, potentially some distance away, so the impedance of the transmitter and receiver must be matched to avoid transmission line effects, including signal overshoot and bounce that might cause multiple registrations. This can appear as an incorrect (or more importantly variable) number of ACP pulses received per scan. Different radars may present the signals in different electrical forms, including RS422 differential, open collector or a single-ended signal referenced to ground.

If the ARP pulse is missing or being incorrectly processed, the radar data may appear to be correctly received and displayed, but without the ARP pulse the angle of the radar picture may be incorrect or drift over time.

When using Cambridge Pixel’s HPx radar interface hardware, there is considerably flexibility in the configuration of the ACP/ARP receivers to handle different signal types and different voltages. The configuration process involves setting the links on the card correctly (there is a useful tool on our web site to assist with this – see example here for HPx-300) and getting the software options correct. Both hardware links and software configuration need to be correct for the acquisition of the signal.

More information on the configuration of the HPx cards can be found in an application note on this topic. If you are not a registered customer, you can still access the full application note by emailing us.

Would you like us to feature a specific topic or a solution in our Insights? Email us with your suggestions.