Can we improve this page?
Send your feedback to:
[email protected]

GPS Assist is software that uses data from an existing maritime radar to estimate the lat/long position of a ship or unmanned surface vessel (USV) by comparing received radar data with expected radar returns that are predicted from the appearance of local terrain and shorelines. The calculated position is then compared with GPS-received position, with errors being used to infer missing, spoofed or jammed GPS signals. When such a condition is detected, GPS-Assist can raise an alarm and create its own stream of NMEA-based navigation data with the goal of providing emergency navigational information.

GPS Assist works with existing maritime radars. The ship’s normal processing and display of the radar data is unaffected by GPS Assist, which simply piggybacks on to the data stream to process the radar video. The radar video is scan converted to an image which is then compared to a predicted radar image derived from a terrain database. The prediction process uses terrain and coastline information to create a predicted radar image. This predicted image is compared with the actual radar image and an alignment process adjusts the real data to match with the predicted data. The error between observed and predicted positions is used to adjust the estimated position of the ship. GPS Assist takes standard NMEA-0183 navigation data as an input and continually compares the reported GPS position with the estimated position. If a significant error is detected, the incoming GPS stream is suspected to be missing, spoofed or jammed. At this point, GPS Assist can simply generate an alarm to permit another sub-system to handle the consequences, or else GPS Assist can generate its own stream of NMEA-0183 data with corrected navigation data. 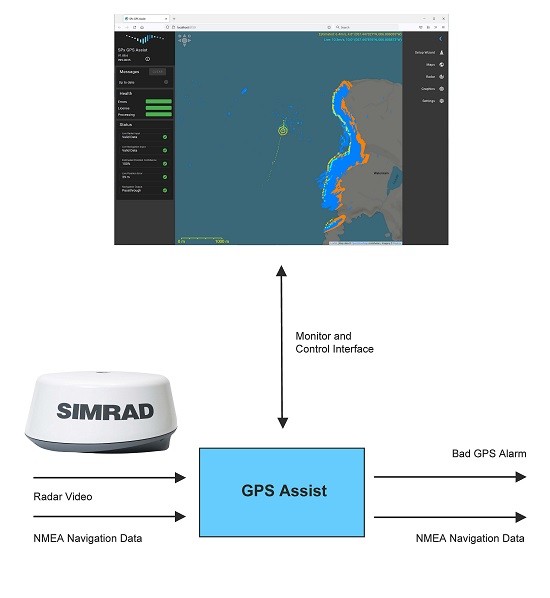 Initial configuration of GPS Assist can be achieved through a web browser interface, which permits the live and predicted radar video images to be visualised, along with the features that are used for matching. The estimated position of the ship is displayed in the application and parameters affecting the performance can be adjusted. Once configured, GPS Assist runs as an unattended server application under Windows or Linux, with network messages used to report status and, if desired, provide a runtime control interface.

* A separate radar interface card or format conversion module may be needed for some radar models.

Docs
GPS Assist Datasheet
Images
GPS Assist works by comparing real radar video (blue in the above) with predicted video returns calculated from a terrain database (orange in above). By shifting the position of features in one image to find the best fit, the true position of the ship is estimated.
Settings Options
Status View
Video
GPS Assist

Need help with a project?

Discover our other products