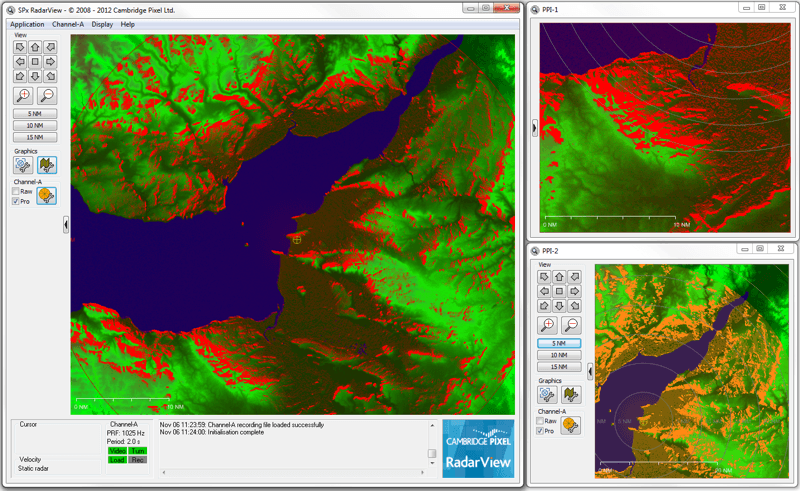 By adding this capability, RadarView users will be able to not only capture, display and record primary radar and camera video but also to validate and interpret the results based on the map and chart data now available.

David Johnson, managing director, Cambridge Pixel, said: "RadarView is a cost-effective tool for anyone - laboratories, researchers, and other radar end users - that requires a low cost, ready-to-run primary radar display application. In fact, with the map and chart overlay capability providing the context, RadarView could also now be deployed as a basic sensor display system, shipboard radar console or a port display system!

"We see RadarView as a flexible tool that's a useful addition for any radar user's armoury - a bit like the oscilloscope is for the electronics test engineer. It can be used to set-up, calibrate, support and maintain a radar display or to record radar data during a mission or research expedition."

Other enhancements to RadarView include interference suppression to reduce the display corruption that can occurs when similar radars are operated nearby, and adaptive noise removal to improve the appearance of the radar video by selective removal of background clutter.

The ready-to-run RadarView software also allows radar video and camera images to be viewed in multiple windows (up to 5) using standard PC and graphics technology, which allows for considerable flexibility in hosting on low-cost hardware and distributing the radar image remotely using standard Windows capabilities.

"RadarView is already used for a multitude of different applications from ship-based geological research to laboratory-based radar test systems," added David Johnson. "Kelvin Hughes, for example, uses RadarView as a radar display for set up and maintenance of a shore-based radar system."