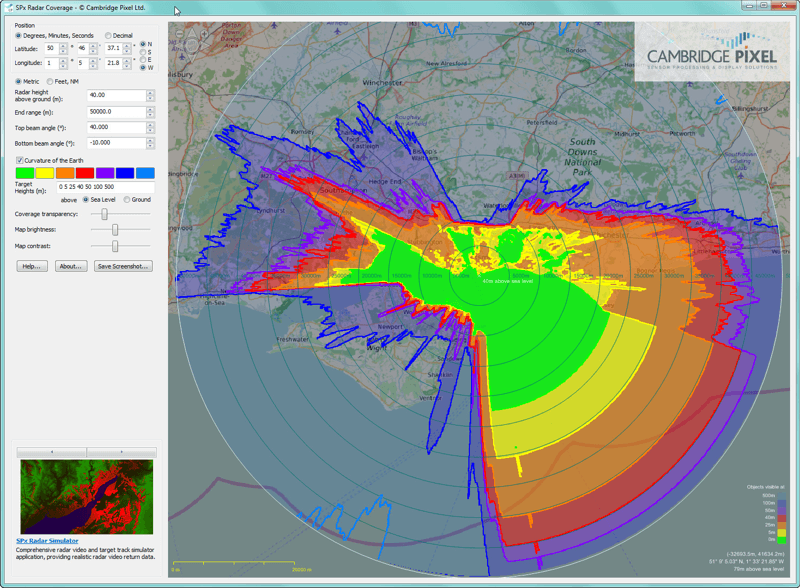 CAMBRIDGE, United Kingdom, September 26th, 2016 - Cambridge Pixel (www.cambridgepixel.com), an award-winning supplier of radar display, tracking and recording subsystems, has announced the availability of a free software tool to assist commercial security and defence integrators, installers and developers to select the optimum location for a radar or other sensor based on line-of-sight visibility.

The SPx Radar Coverage Tool is an easy to use downloadable Windows application providing a visual display of radar coverage around the world. The tool calculates the visibility of targets at different heights based on the location and height of the radar. It uses terrain data from the Shuttle Radar Topography Mission to calculate the line-of-sight from the radar to each point in space, and the display then shows this as colour-coded bands on an underlay map.

The proposed location of the radar may be entered directly as latitude and longitude or the operator can simply click on a high-resolution map. The height of the radar and parameters of the radar itself (end range, top beam angle and bottom beam angle) may be entered and adjusted interactively, with the tool indicating target visibility as a function of height. Curvature of the earth effects are also factored into the line-of-sight calculations.

David Johnson, CEO of Cambridge Pixel, said "This is a really useful tool that our commercial security and defence customers have been asking for. It is easy to use and provides a fast, interactive method of exploring the implications of different radar locations and heights.

"The Radar Coverage Tool will be helpful in a variety of radar surveillance applications from coastal and air defence through to ground protection of military forward operating bases, large camps, observation posts and patrol bases where land features may provide blind spots in the radar coverage."