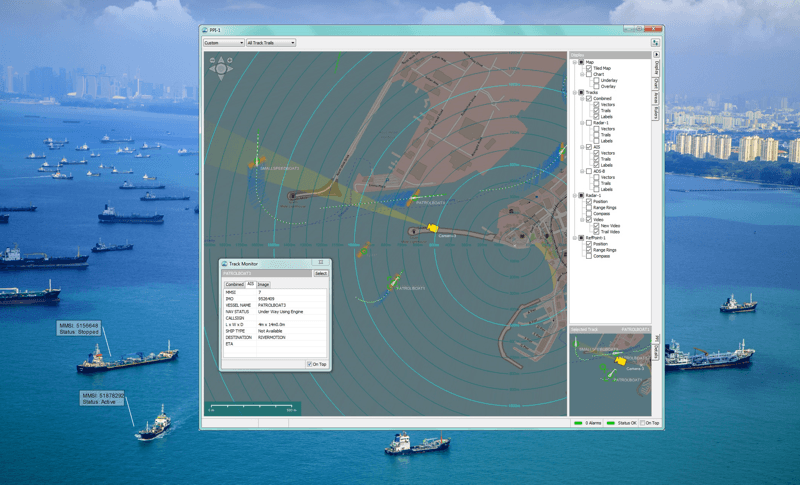 The Windows-based RadarWatch software application can display tiled maps, S57/S63 electronic charts, video from up to 2 radars and video from up to 16 cameras, within multiple windows and across multiple screens. RadarWatch is compatible with a wide range of radar scanners, including those from Kelvin Hughes, Simrad, Terma and Furuno, and provides a common software architecture that can be scaled to single or multi-sensor installations.

Augmented vision is implemented within RadarWatch to fuse primary radar tracks with data from ship (AIS) and, where appropriate, aircraft (ADS-B and IFF) transponders and then display this as an overlay to camera video. This feature aids the interpretation of a complex surveillance situation enabling a faster response to threats, clarity of decision making and improved situational awareness, as well as enabling features such as slew-to-cue.

"Our product works seamlessly with many different radar and camera sensors and by implementing augmented vision, we can allow targets to be labelled within the camera video footage, easing the burden on the operator and enabling faster, clearer and better-informed decisions."

RadarWatch also features comprehensive alarm logic allowing alarms to be configured based on areas, target activity, or target behaviour. Full recording of sensor data, cameras, network traffic and operator screens is provided by the optional RDR software. Target tracking is provided by Cambridge Pixel's SPx Server, which can run local to the RadarWatch display, or remotely if the radar sensor is distant.

Cambridge Pixel provides integrators with a highly flexible solution. The RadarWatch software accepts open data formats such as ASTERIX and NMEA-0183 and works with Cambridge Pixel's own software modules too, such as SPx Fusion, SPx Camera Manager and SPx Radar Data Recorder.

"This open and modular approach gives systems integrators the flexibility to design and build a complete coastal security solution selecting from us just the functional modules they need to meet the requirements of the particular project," said David Johnson. "This enables them to add their own value and not get locked into an expensive and inflexible coastal surveillance solution."