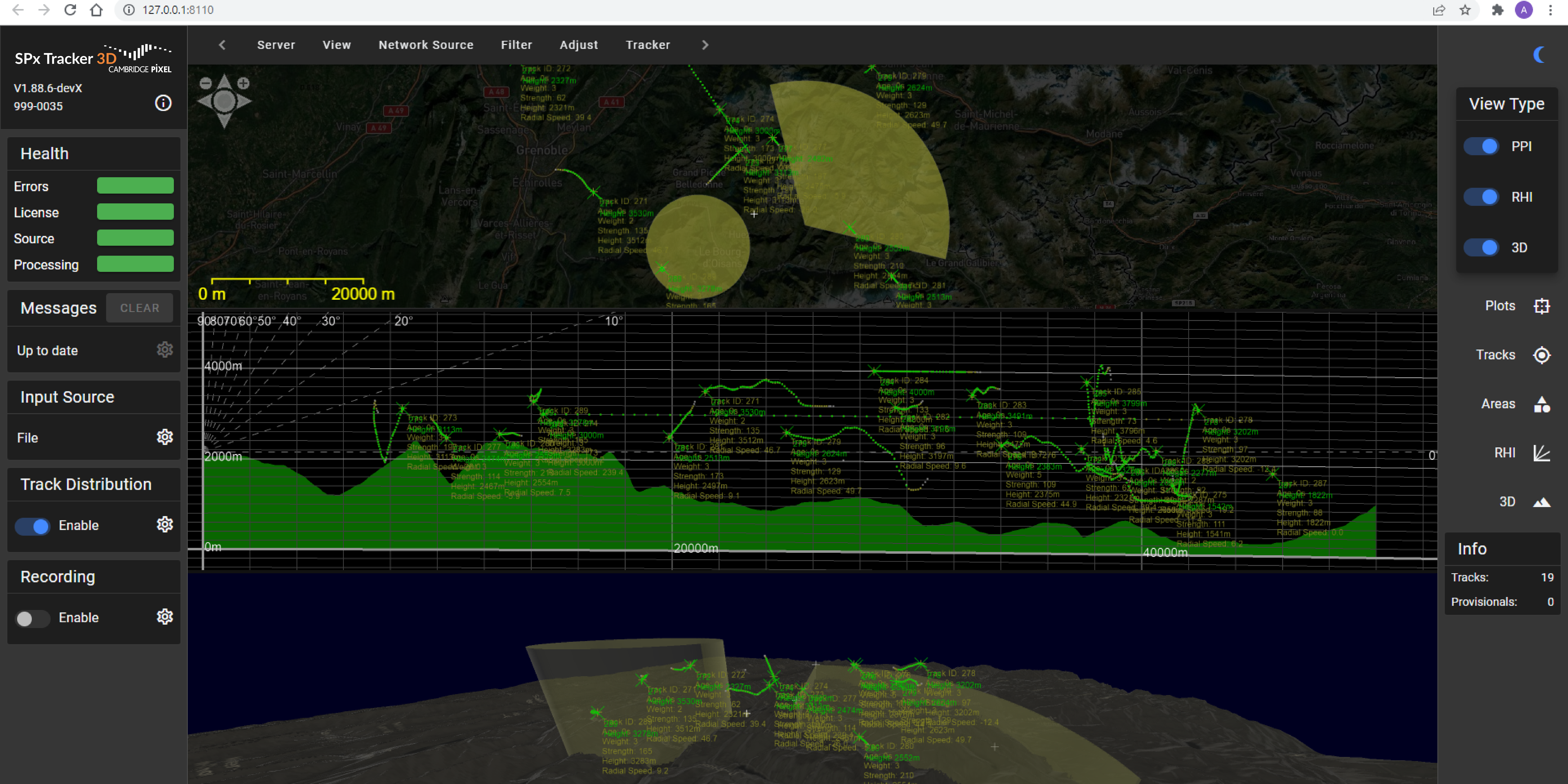 CAMBRIDGE, United Kingdom, March 1, 2022 – Cambridge Pixel has launched a new software-based radar tracker for manufacturers and integrators of deployed E-scan (electronic) radars. These are radars that can be steered electronically and do not require a mechanically rotating antenna. Such a design reduces the radar cross-section and infrared signature of an installation, making it altogether more ergonomic and robust for deployment in ground-based security surveillance applications or in air defense.

The new SPx Tracker-3D is a primary/IFF radar tracker, with automatic track initiation that takes in plots (rather than video) from the sensor to create and maintain tracks, which can be output in ASTERIX format for external display or fusion processing. The software is capable of tracking up to 4000 targets, and allows users to configure target dynamics and heights appropriately, associating new plots with existing tracks, so that positions can be accurately updated using a Kalman filter.  This is essential to ensure that noise from the measurement and possible manoeuvres of the targets are taken into account, filtering to accommodate varying degrees of uncertainty in the measurement process. Where new plots cannot be associated with existing tracks they become candidates for new tracks that can be promoted, after a period of confidence build-up.

SPx Tracker-3D is compatible with Windows 10 (or later) and Linux, has a browser-based interface for initial configuration and reads terrain data at startup to define the 3D space surrounding the sensor, assessing whether targets are likely to be lost because of the terrain. Operators are able to move the viewpoint in real-time to help inspect targets, enjoying visualisation of plots, tracks, terrain and the associated configuration data.

Building on the techniques originally developed to create Cambridge Pixel’s SPx Server, that has been deployed widely around the world in situations varying from the protection of offshore wind farms, coastal surveillance, border security, surveillance of firing ranges and many air defence and naval projects where conventional 2D radars are in use, the SPx Tracker-3D is exclusively designed to operate with 3D data.

This new 3D tracker takes in plot detections with variable update rates, allowing for a greater granularity of information on key targets such as position, size, height and other statistics derived from the radar data, enhancing one’s air defence capabilities. Our software is highly flexible and can work with a wide range of commercial and military radars to assist our customers in providing effective security, and to combat an increase in terrorism, smuggling, piracy and insurgency.”

Cambridge Pixel's world-leading SPx suite of software and applications provide highly flexible modules of expertise, that are either ready-to-run or configurable to a specific setting or project. Cambridge Pixel's engineering team has decades of experience of developing complex radar processing and display systems for airborne radar applications, air traffic control, security as well as naval and vessel traffic.

Watch this video for a preview of the software.