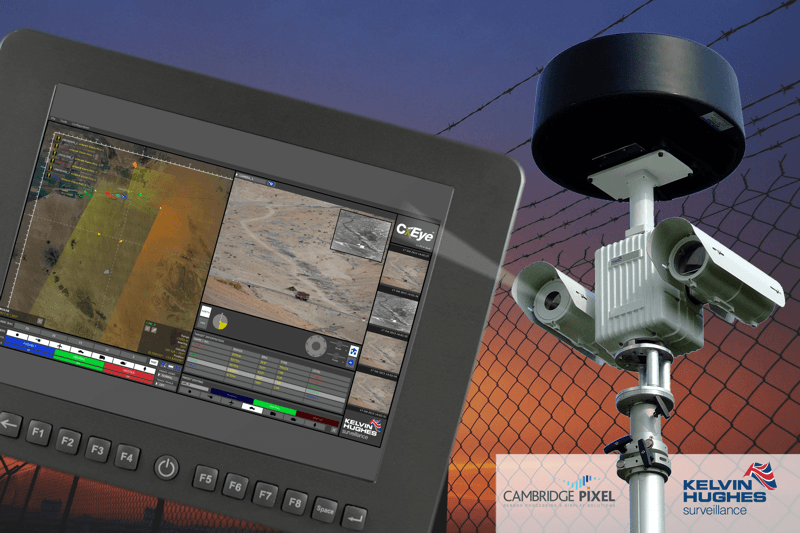 Engineers within Kelvin Hughes Surveillance business in Enfield, north of London, England, needed software components for its new display for processing and display of radar and video in multi-sensor security applications. With pressure on time and budget, the company turned to sensor processing and display specialist Cambridge Pixel for a solution from its hardware-agnostic SPx range of software modules.

Kelvin Hughes selected modules for radar acquisition, display, multi-hypothesis target tracking, fusion, camera control, map display and control functions. These were integrated into an easy-to-use, touch-screen-capable display that combines sensor data from multiple SharpEye™ radars, along with georeferenced maps and multiple cameras. Radar tracks are displayed in an easy-to-understand format to assist the user to evaluate and coordinate a response through a 'detect, recognise, identify and then classify' methodology.

Jonathan Field, director of the surveillance security business at Kelvin Hughes, said: “We have been delighted to build upon our existing partnership with Cambridge Pixel in the development of the CxEye™ software. It has been a resounding success and has enabled us to develop the CxEye™ solution on time and on budget. The two teams worked seamlessly on the project and we were impressed not just by the software modules but also by Cambridge Pixel’s responsiveness throughout the project.
“Cambridge Pixel’s best-of-breed software modules have enabled the CxEye™ solution to be built with a modular, extensible architecture which allows us to offer a wide spectrum of surveillance solutions from single sensor, single cameras through to multiple nodes with separate command and control.

It perfectly complements our SxV radar (a lightweight radome version of SharpEye™) developed for the land security market. We launched both products at the end of 2013 and the combination has been really well received by our target market, providing, as it does, proper integrated situational awareness to unskilled operators, with minimal training requirement!”

David Johnson, Cambridge Pixel’s managing director, said: “We are delighted that Kelvin Hughes has selected our SPx software components to provide the core processing and display capabilities at the heart of its CxEye™ integration and surveillance display software.

“Our field-proven software components support the presentation of multiple overlapping radar videos with underlay maps, overlay tracks and symbology. Cameras can be selected and slaved to tracks updated from the radar or controlled manually by an operator in response to threats.”

Kelvin Hughes' CxEye™ software, launched in late 2013, is part of the company’s security surveillance portfolio. CxEye™ integrates multiple sensors, such as radars and cameras, into a single, easy-to-use touch-screen-capable display package. It is targeted at security and surveillance applications including border/perimeter security and critical infrastructure protection.