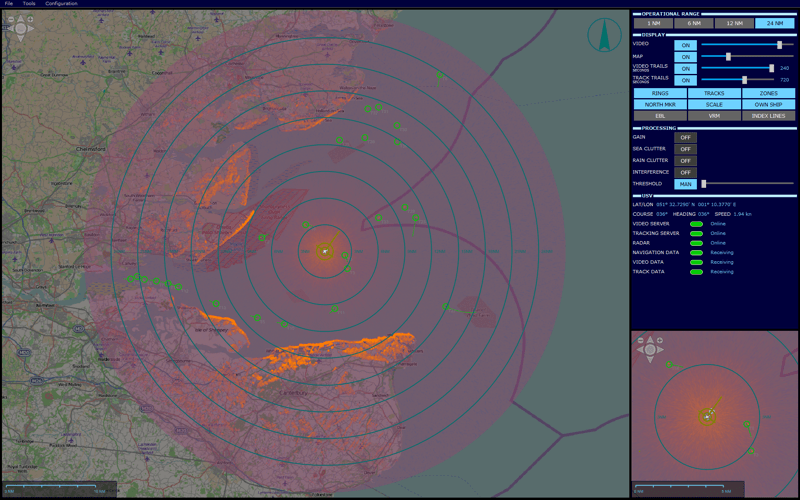 USVx provides a powerful and intuitive graphical user interface designed for use with touchscreens that allows the operator to change range scale, control the operation of the radar and tracker remotely, and monitor alarms and track reports. Fusion software enables AIS reports to be combined with radar tracks.

USVs are vehicles that operate on the surface of the water without a crew and are controlled from a ground station or a mothership. A typical surveillance USV is a sensor-rich platform with capabilities for self-guidance and automatic decision making. Radar is the key sensor for most ASV applications as it provides the data to steer its course and avoid obstacles.

The market for USVs is growing rapidly, driven by demand from navies and commercial enterprises worldwide for more effective maritime security – to combat terrorism, piracy and smuggling, to protect of shallow waters and ports, and for environmental monitoring.

Mark Saunders, sales director, Cambridge Pixel, said: "We are excited to be at the forefront of USV development. Our expertise is well-suited to autonomous vehicles as our core competence is extracting and tracking targets from radar video. Already, we have been working with some of the key USV developers who come to us because we have the capability to interface to a wide range of radar types and offer modules for radar acquisition, processing, tracking, fusion and recording.

"With the addition of USVx, we can now offer our partners a ready-to-run client application providing clear, maritime-style presentation of radar video, tracks and AIS data, alongside our suite of SPx software," said Saunders, "giving integrators flexibility and freedom to use just the modules they require for their specific solution."

Cambridge Pixel's range of interoperable radar processing, display and recording solutions are easily adapted to a wide range of USV platforms to provide local processing as well as remote display of radar and camera video at a control facility.

"Mission recording is another important consideration in USV applications and this can be handled by our radar data recorder (RDR), which captures and stores radar video, tracks, camera video, AIS, and navigation data from the remote vehicle," added Mark Saunders. "The mission data captured by RDR may be replayed through USVx for post mission review and analysis."